A new Brand, a Holiday and Summer

It is incredible to think about how much has happened over the last few months. Sometimes things happen that you least expect to change things rapidly.

At METS I mentioned having drinks with suppliers, this often meant being introduced to some of their other Distributors and Friends in the Industry. One of these people I then bumped into at a later stage and they introduced me to someone else…. You get the idea and all the while having great chats about what we all do.  A few weeks later and the unexpected happens. We find ourselves with a new brand!

Why am I so excited about this? As a kid I was taught to service winches by the legend Pat Carroll. I can’t remember exactly how old I was but I used to love doing it on his Adams 10m and spending time with him learning how to look after your boat. Pat was also the first person to let me steer the boat into the old marina without a motor and I had to stand up on the side so I could see where I was going I was so little.

Years later when I owned Animus I was doing just that and had someone advise me that it was not the job of a young female. It is a story I often tell as I am proud of the fact that I shook it off and responded that I hoped it was the job of a boat owner. I loved that time working on the boat, listening to music and spending the day chilling out on the boat. It wasn’t all about the one design racing and twilights.

So taking on a brand like Antal not only makes sense for DeckHardware but I am looking forward to what that also means for me and the type of products I get to play with aka work with.

A few weeks after this all happened we were sponsoring the 13 and 16 foot Skiff Nationals. So it was decided after a little encouragement from Nathan, that I head to QLD with the sailors for a bit of a Holiday.

It was awesome to be able to clear my mind, recharge a bit and have some fun on the water. It meant I was able to get photos to use for the coming year in my marketing as well as having fun with the Eric’s Storage and Sheerline crews back where we were staying. No doubt many of you saw the Instagram action…

Whilst in QLD I was able to visit the first boat I ever sailed on when I was apparently just days old. She looks so beautiful but a bit smaller to me now. I am so very happy to see her looking so amazing. My Grandpa would be so very very very happy, I am. Animus was named after Defiance and why I had blue shirts and spinnaker. 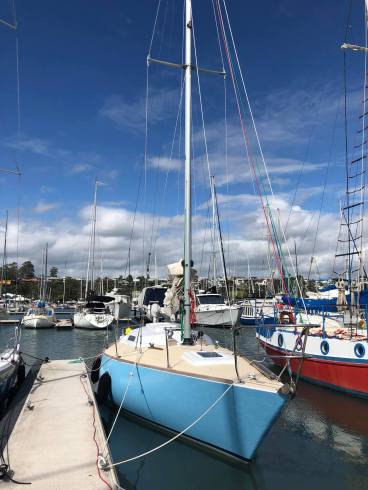 Eric’s Storage over the weekend managed a 2nd place in the Summer Bright Lager Australian 16ft Skiff Sprint Championships! It has been fantastic working with the team on their fitout and working closely with Allen on what 16ft skiff uses and how we can develop on this.

Summer has been awesome and whilst I am busier than ever I am excited about the direction everything is heading in.